skip to main | skip to sidebar

Management and Control of Genetic Processes in Cotton Plants through Homoeopathy

Management and Control of Genetic Processes in Cotton Plants
through Homoeopathy 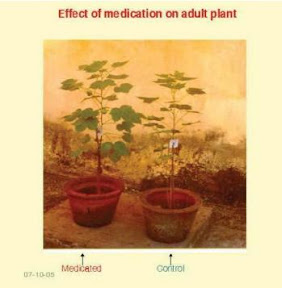 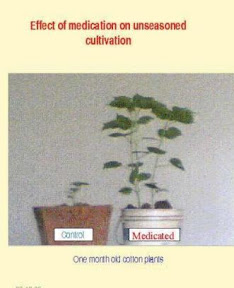 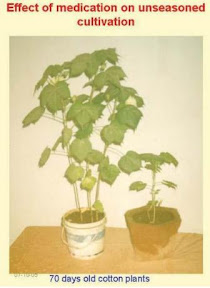 Detailed study on effects of homoeopathic drugs on plant bodies was undertaken at
Central Institute for Research on Cotton Technology (ICAR) in Mumbai. This paper
presents promising results of some of these preliminary experiments. This study reveals
that electrically neutral and pure distilled water develops internal electrical charges as
soon as homoeopathic drugs are added into it. Different drugs as well as different
potencies of same drug develop different electrical charges. Further experiments,
conducted on plants, proved that medicated water containing drugs of highest potency
strongly influences the genetic processes of plants. It can accelerate germination
process, can shorten cultivation period, can enhance yield as well as quality of cotton
crop and also makes it possible to grow it during off-season.

Homoeopathic drugs are prepared by successively diluting the drug in the medium of rectified spirit.

The original drug diminishes gradually with each successive dilution. After few diluting stages, the
original drug physically disappears from the medium (spirit). However, with each successive dilution, the
drug becomes effectively more powerful as far as its effect on human body is concerned. Researchers
of medical science could not find the physical presence of original drug in homoeopathic medicines of
higher dilutions (potencies). Under the circumstances, very credibility of homoeopathic stream of science
is being suspected.

Under this background, research study on the current subject was carried out in two phases. In the first phase of
work, through series of experiments, it is established that electrically neutral pure distilled water develops internal electrical charges as soon as few drops of homoeopathic medicines are added into it. Different drugs as well as different potencies (dilutions) of same drug produce different electrical charges. In the second phase of this study, through various experiments conducted in pots, it is proved that such medicated water containing drugs like Abrotanum etc. in highest potency (containing electrical charges) influences the genetic processes of cotton plants in a big way. It can accelerate germination process, can shorten the cultivation period, can enhance the yield and quality of cotton crop and also makes it possible to grow it during off-season.

I collect with vodpod